What the Heck is Pickleball?

A great question and if you've found this website then you've probably at least seen people playing the game or have heard about it and you are curious.

The following is taken from Wikipedia. Click to view more

Pickleball is a racquet sport in which two to four players use solid paddles made of wood or composite materials to hit a polymer perforated ball over a net. The sport shares features of other racquet sports, the dimensions and layout of a Badminton court, and a net and rules similar to tennis with a few modifications. Pickleball was invented in the mid 1960s as a children's backyard pastime but quickly became popular among adults as a fun game for players of all skill levels. 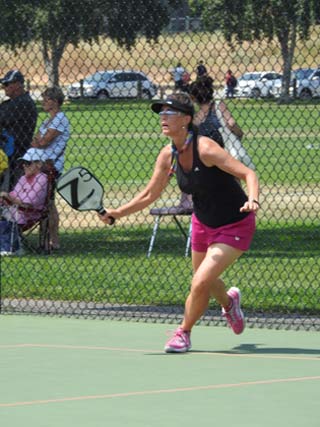 The game started during the summer of 1965 on Bainbridge Island, Washington, at the home of then State Representative Joel Pritchard who, in 1970, was elected to the U.S. House of Representatives for the State of Washington. He and two of his friends, Bill Bell and Barney McCallum, returned from golf and found their families bored one Saturday afternoon. They attempted to set up badminton, but no one could find the shuttlecock. They improvised with a Wiffle ball, lowered the badminton net, and fabricated paddles of plywood from a nearby shed.

Although some sources claim that the name "Pickleball" was derived from that of the Pritchard family dog, Pickles, other sources state that the claim is false, and that the name came from the term "pickle boat", referring to the last boat to return with its catch. According to Joan Pritchard, Joel Pritchard's wife, the name came "after I said it reminded me of the Pickle Boat in crew where oarsmen were chosen from the leftovers of other boats. Somehow the idea the name came from our dog Pickles was attached to the naming of the game, but Pickles wasn't on the scene for two more years. The dog was named for the game."

The ball is served with an underhand stroke so that contact with the ball is made below waist level (waist is defined as the navel level) in an upward arc from behind the baseline, diagonally to the opponent’s service zone. Points are scored by the serving side only and occur when the opponent faults (fails to return the ball, hits ball out of bounds, steps into the 'kitchen' area [the first seven feet from the net, also known as the non-volley zone] in the act of volleying the ball, etc.). A player may enter the non-volley zone to play a ball that bounces, and may stay there to play balls that bounce. The player must exit the non-volley zone before playing a volley. The first side scoring 11 points and leading by at least two points wins. The return of service must be allowed to bounce by the server (the server and partner in doubles play); i.e. cannot be volleyed. Consequently, the server or server and partner usually stay at the baseline until the first return has been hit back and bounced once. In doubles play, at the start of the game, the serving side gets only one fault before their side is out, and the opponents begin their serve. After this, each side gets 2 faults (one with each team member serving) before their serve is finished. Thus, each side is always one serve ahead or behind, or tied. In singles play, each side gets only one fault before a side out and the opponent then serves. The server's score will always be even (0, 2, 4, 6, 8, 10...) when serving from the right side, and odd (1, 3, 5, 7, 9...) when serving from the left side (singles play only).